Benefits of 3D Printing in Manufacturing

The whole production line can be adjusted and adapted with the speed of the printing production line. Therefore, improvements to machinery, adjustments to the print speed or even a change of product can be made almost instantly. When you consider this against older methods, it can take several weeks or months to make the changes and then begin producing again.

Traditional manufacturing methods are notoriously expensive, whereas the 3D printing process makes the creation of parts products cheaper and more accessible. Unlike traditional manufacturing where many different people may be required to operate a number of machines or a production line is required to piece together the product, 3D printing removes this. Each 3D printer will require an operator to start the machine before it begins an automated process of creating the uploaded design. Therefore, when using 3D printing for manufacturing, the labour costs are significantly lower as there is no need for skilled machinists or operators to form part of the process.

When businesses have the ability to confirm a design before committing it to production, it can help to remove the risk of errors, wasted materials and money. Creating products with 3D printing can help to increase confidence, especially when you consider that a 3D prototype is easier to redesign and alter than anything that has been created using a traditional method.

Failure is cheaper and faster

3D printers will not need to be retooled between production runs. The speed at which a 3D printer can assemble could be deemed to be slower than that of a traditional assembly line. However, when you factor in machinery problems that can stop production and human error, there is more that can go wrong with traditional manufacturing.

3D printing makes it possible to develop ideas at a faster pace. In some instances, it could be possible for 3D concepts to be designed and printed on the same day but in terms of large-scale manufacturing, it is certainly faster than conventional methods. This can help companies to reduce manufacturing time from months to days while ensuring that they remain ahead of their competitors.

Disclaimer : The following videos are not promote any brand or model but to just highlight the uses of 3d Printing Globally.

Navneet Education is a well-known company into business of education and book publishing. It operates in publications, stationeries and other products.

They use traditional method of injection molding to manufacture their stationaries. These products requires frequent modifications and thus incurring high cost of manufacturing for printing in smaller quantities.

They were aware of 3D printing and wanted to try it out and approached us for the job work. They briefed us about their product and the problems they were facing with the traditional method and we heard the patiently. We understood their requirement of binding clips, we designed it through the 3D designing tools and supplied they a 3D printed sample with aluminum filled PLA filament. They were very happy with the output and its quality and that is how we won the order of the job work of binding clips in higher quantities.

This is how we built a partnership with Naveen Education and have on-going job work from them. They are considering to purchase 3D printers and being educated by us on the same. 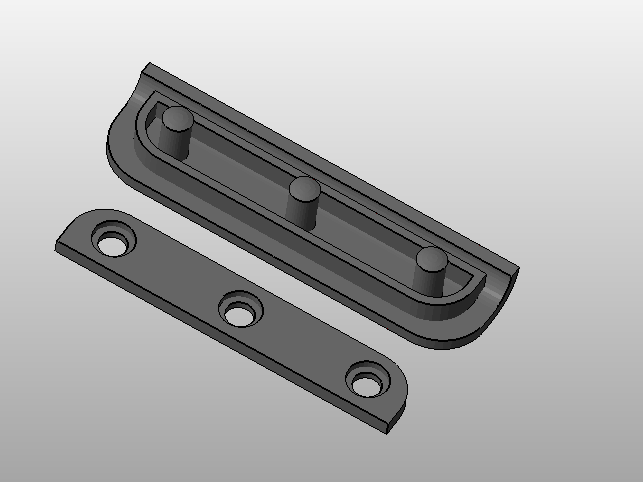 Indian Western railway workshop personal Mr. Nitin Mayekar visited our facility and explained his requirement. They were using traditional method of die casting to produce metallic models but due to products high weight and cost, they wanted to explore 3D printing.

They came up with ceramic mold of the Ashoka emblem and asked us to 3D scan and re-produce or reverse engineer using 3D scanning methodology. We suggested them 3D modeling as an alternative because it can provide better resolution to 3D printed output. They wanted to cost efficient method hence opted for 3D modeling.